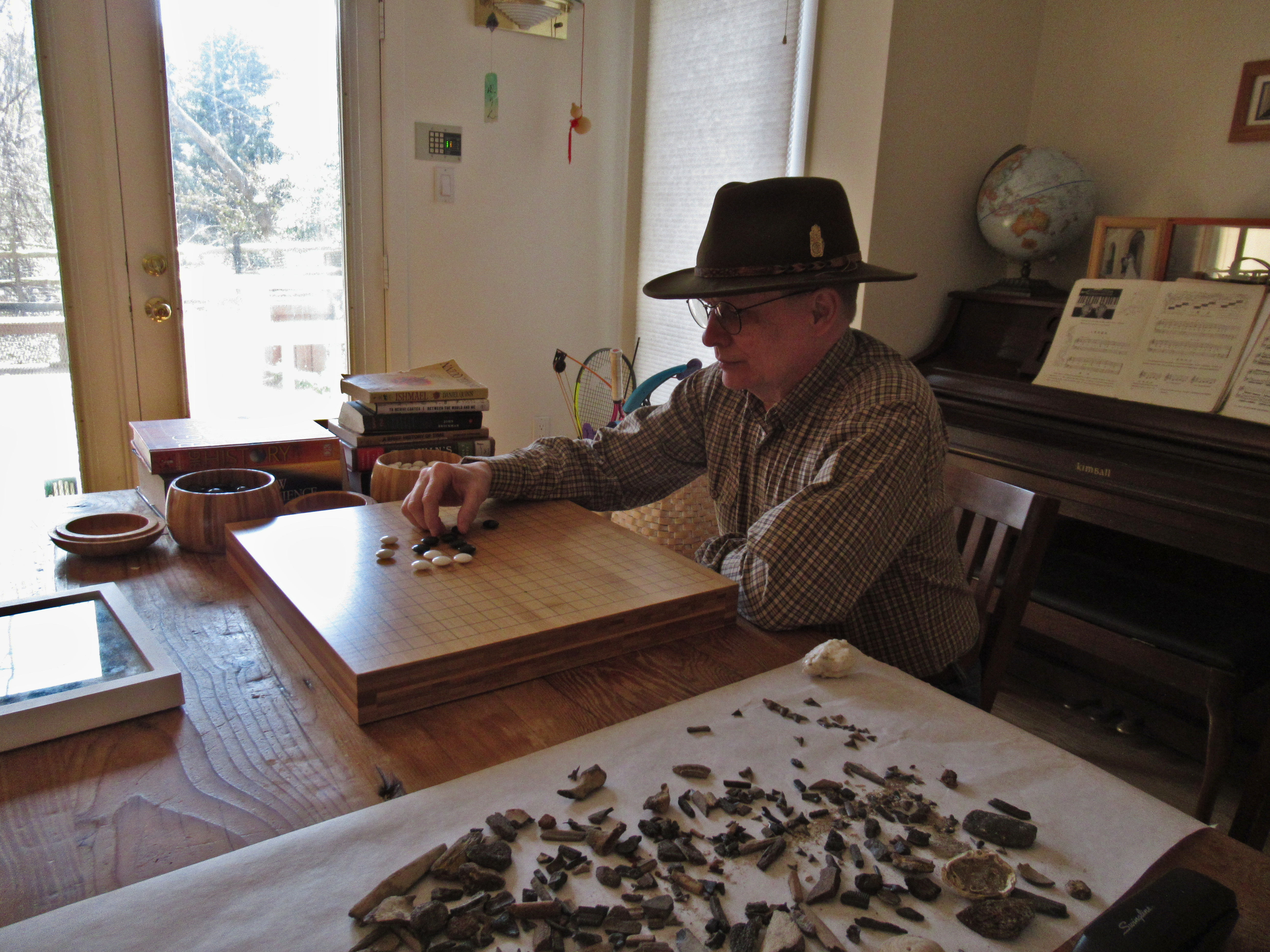 Enlightenment sometimes arrives in fits and starts. Gregor Mendel’s understanding of genetics lay dormant for decades before its rediscovery. In 2001, a thousand-year-old document was probed with invisible wavelengths of light to reveal a treatment of mathematical infinity by Archimedes nearly two millennia senior to Newton’s. Before Copernicus considered heliocentrism and Babbage imagined his mechanical computer, classical Greeks were using actual clockwork computers to calculate the dates of past and future solar and lunar eclipses.  Ideas and technologies often sputter or are forgotten before finally kindling revolutions of thought and industry.

In the 1950s John Von Neumann designed self-replicators that he envisioned would run in cellular automata. Mathematician Nils Barricelli ran self-replicating programs in the 50s and 60s on early digital computers and printed their intriguingly organic patterns before declaring his code to have “properties startlingly similar to living organisms. His work cast barely a ripple and faded into obscurity. It took a biologist trained as a natural historian decades later to independently discover just how closely self-replicating computer programs could emulate the signature traits of familiar, carbon-based life.

In his early academic career, Thomas S. Ray did field biology in the rain forests of Costa Rica. His keen observation led him to discover and document skototropism, the counterpart to the more familiar tendency of plants to grow toward the light. Later, in a chance encounter on campus, he met an artificial intelligence researcher musing over the ancient game of Go. He learned that just as living organisms suffer from crowding, in the game of Go, groups of stones on the board “die” when they are entirely enclosed. Ray learned that “it is possible to write a self-replicating computer program.” The biological metaphor fused with the idea of replicating code and began to evolve in Ray’s own mind.

A decade later, Ray found himself with a computer and development system in hand. He acquired the tools to unleash his idea and was unable to resist the call. Neglecting his work, he set out to teach himself computer science and the engineering techniques he needed to instantiate his “evolving digital life forms.”

His research led him to discover the nascent field of artificial life. He met with like-minded researchers at the Santa Fe Institute and the Artificial Life group at Los Alamos National Laboratories. One of whom, Steen Rasmussen, had made his own digital “primordial soup” from which he hoped to observe the emergence of self-replication. Walter Fontana also sought self-organization from a heterogeneous “Turing gas” of digital code operating upon itself like molecules within a cell or primordial sea. The others doubted that Tom Ray’s idea of seeding the “soup” with self-replicating code snippets that experience mutation would yield interesting results. They noted that computer code was fundamentally brittle. It typically ceases to function when a single random bit is altered.

Ray returned from the meeting and set to work. He describes the system he built and named Tierra:

The instruction set of the CPU, the memory, and the operating system together define the complete “physics and chemistry” of the universe inhabited by the digital organism. They constitute the physical environment within which digital organisms will evolve. Evolving digital organisms will compete for access to the limited resources of memory space and CPU time, and evolution will generate adaptations for the more agile access to and the more efficient use of these resources. The bit pattern that makes up the program is the body of the organism, and at the same time its complete genetic material. Therefore, the machine language defined by the CPU constitutes the genetic language of the digital organism.¹

Ray came up with a plan to address brittle code. He wrote a virtual machine that caught all of the exceptions caused by broken code, similar to those in use in web hosting facilities all over the world today. In Tierra’s virtual machine, errors were noted but not allowed to bring down the system. Ray seeded the virtual machine with a rudimentary self-replicating program. He said:

I expected to spend years modifying the design of the computer, and testing ever more sophisticated self-replicating programs on it. My plans were radically altered by what actually happened on the night of January 3, 1990, the first time that my self-replicating program ran freely on my virtual computer… My research program was suddenly converted from one of design, to one of observation. I was back in a jungle describing what evolution had created, but this time a digital jungle. There was an amazing menagerie of digital creatures, unfolding through the process of evolution. Describing them was an adventure, because they inhabited an alien universe, based on a digital physics totally different from the physics inhabited by the life forms I knew and loved. Yet forms and processes appeared that were somehow recognizable to the trained eye of a naturalist.

The most striking and strangely familiar feature of my digital universe was that evolution found an endless succession of ways for creatures to exploit their neighbors, and to defend themselves against such exploitation. Evolution is basically a selfish process, in which every individual is out for themselves, and success is measured in leaving more of your genes in future generations. But evolution is very inventive about how that ultimate goal is achieved. Evolution mindlessly takes advantage of whatever is available in the environment of the organism…

[Parasitic processes] perfected the techniques of using their neighbor’s information, and quickly came to dominate the soup by pouring out copies of their streamlined informational bodies.

But their dominance was short lived. They became the victims of their own success. They didn’t bother to replicate critical information that they needed to reproduce, because they could easily find it around them. However, the environment soon became filled with these little parasites, and the critical information was no longer so easily found. The parasites began to die off, starved for information.

The hosts and parasites not only cycled, they entered into an ever-escalating evolutionary race, each one outdoing the other, in turns. The hosts evolved mechanisms of immunity to parasites, and the parasites evolved techniques to circumvent the immune mechanisms. Then the hosts evolved means of deriving advantage from being parasitized, by tricking their parasites, and subverting the energy metabolism of their supposed parasite for their own reproduction. The hosts allowed the attacking informational parasites to reproduce once, and then provided the parasites with mis-information, causing the parasites to devote themselves thereafter to making copies of their supposed hosts…

Along the way, unknown to me, my creatures had discovered sex. I found out when I tried to stop evolution by turning off mutation. The creatures evolved anyway. Some further experimentation and observation revealed that they were mingling their genes in their offspring, producing offspring unlike either parent. Mutation was no longer necessary, and I was no longer in control. They had taken their own destiny into their own hands…

Being in the position to observe and manipulate such alien life forms has changed the way I think about life and evolution. Rather than thinking of life-as-we-know-it, I think of life-as-it-could-be. Rather than thinking of the evolution of life on Earth, I think of the evolutions of life in various physical substrates, past present and future. Virtual life is a very powerful tool for thinking about real life. Because of its relative simplicity and its easy manipulability and instrumentation, it is much easier to formulate and find the answers for difficult questions about life and evolution in the virtual universe.

Evolution by natural selection is a process that enters into a physical medium. Through iterated replication-with-selection of large populations through many generations, it searches out the possibilities inherent in the “physics and chemistry” of the medium in which it is embedded. It exploits any inherent self-organizing properties of the medium, and flows into natural attractors realizing and fleshing out their structure.¹

Tom Ray continued to work on the Tierra system, eventually recruiting an avid group of supporters. A research assistant wrote a graphic system for visualizing what was happening inside Tierra’s world. A networked Tierra allowed many computers to participate. It launched with media fanfare. Freeman Dyson called it “something so far ahead of its time.”² Ray hoped that the larger and more diverse environment would lead to greater differentiation. He and his colleagues seeded the new world with a more complex ancestor organism. They hoped for a Cambrian explosion of diversity.

Nearly twenty years later, Tierra has a number of active communities continuing to tinker with it. But Tom Ray has put his own system into hibernation and turned to study of the mind as he continues to teach biology. A web search on “the insight of Tom Ray’s Tierra” brings up a passage in the book, Theory and Reality: An Introduction to the Philosophy of Science by Peter Godfrey-Smith:

During the heyday of the movement, two or three pieces of work appeared that were strikingly successful. Perhaps the most impressive of all was Tom Ray’s Tierra project, in which Ray was able to create open-ended evolution among self-replicating programs in a computer… All of this was impressive work, and it pointed the way forward to a consolidation of what these imaginative individuals had done. But the consolidation never happened. At each conference I went to, the larger group of people involved all seemed to want to do things from scratch, in their own way… There was not nearly enough work that built on the promising beginnings of Ray and others. The field never made a transition into anything resembling normal science. And it has now ground to a halt.

Tom Ray, in a recent interview, concurred to a degree with this assessment. He said that what had appeared to be open-ended evolution in the early hubbub of artificial life research eventually turned out to be elusive. The selective pressure toward efficiency which had immediately birthed fascinating co-evolutionary races between parasites and hosts did not lead to a Cambrian explosion when Tierra grew and became more complex. Differentiation eventually tapered off. As students came to Ray to attack the quest of open-ended digital evolution he did not discourage them, but came to think of the attempt and the inevitable disappointment as a right of passage in the field.

The current A-Life literature supports this. One recent article proclaims, “Open-endedness: The last grand challenge you’ve never heard of”³ There have been three workshops on open-ended evolution in the past three years. Stanley et al report, “Most [evolutionary algorithm]s run for a short time, maybe of couple days, and converge to a solution, in the ideal case, or otherwise get stuck. Even the most sophisticated EAs, even ones focused on creative divergence, run out of steam pretty fast, eventually exhausting their search space of anything new.”

The question becomes whether Tom Ray’s Tierra will go dormant like Babbage’s computer design which slumbered for 153 years before being instantiated and set running at the London Science Museum; or will we grasp the accomplishment in a meaningful way now, as an exponential rate of societal and technological change tilt us into an unknown future?

Peter Godfrey-Smith (2003). Theory and Reality: An Introduction to the Philosophy of Science, Chicago, IL: University of Chicago.